Go to Top
The Rendell Center for Civics and Civic Engagement 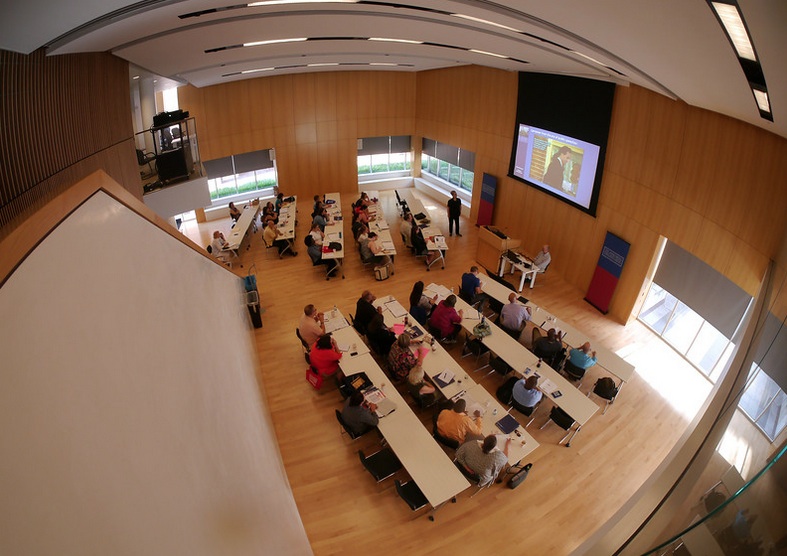 Teachers from around the country gather for our annual week-long Summer Institute.

The Rendell Center provides distinctive learning opportunities for educators and significant financial assistance to help make participation possible. We host summer institutes, including the Summer Institute K-12 Teachers featuring an intensive, week-long course on the substance and teaching of American History, civics, and the Constitution.

Register with us to stay in touch about all of our professional development programs for educators!

The Rendell Center in partnership with the Pennsylvania Department of Education invites you to view their on-demand webinar series, Perspectives on the Supreme Court. The webinar series is led by our esteemed colleague and scholar Dr. Bruce Allen Murphy. The information Dr. Murphy presents is highly informative and engaging, and is recommended for teachers who want to gain a deeper understanding of the Supreme Court, the appointment of justices, and their impact on recent history.

View our Perspectives on the Supreme Court Webinar Episodes

The Rendell Center also creates other professional development opportunities. These include one-day and half-day workshops on the We The Civics Kids Curriculum and a hands-on workshop on how to develop a Literature-Based Mock Trial. Click here to see a sample agenda.

The Rendell Center has developed workshops on Teaching the Constitution and the Democracy Experiment led by Rendell Center Constitutional scholars. The workshops are valuable tools if you are looking to reinvigorate your Social Studies Department or revamp your curriculum. Each workshop can be customized to meet your needs. Our goal is to assist teachers in mastering content, with an emphasis on keeping the subject fresh, relevant, and contextual. Sessions include assistance with curriculum development and teaching strategies. The workshops will not only explore substantive matters, but also promote the development of critical thinking: the disposition to question clearly, deeply and broadly will be encouraged. By tracing the main themes and ideas that shape our understanding, and then engaging in deep analysis of amendment issues, it is our goal that participants will be able to apply their knowledge and experience in a way that allows for more active civic education in the classroom.

The Rendell Center staff will also discuss strategies for cross-disciplinary study, as well as focus on the skills needed to support students in establishing and exploring the connections between ideas, concepts and content as these relate across history, literacy, math and science. Participants will receive content-rich pedagogy designed to engage student interest and increase student achievement. Rendell Center staff will be available to answer questions, review curriculum and provide additional resources between sessions.

Workshop Description – During the two half-day workshops participants will study the United States Constitution, specifically, focusing on the delicate balance between the rights of individuals and the need to govern society.

Session One: Founding of the United States begins with an historical review and a conceptual discussion of the founding of the United States with an emphasis on important founding documents. The workshop will then move to examine specific issues that emerge out of our right to free speech and constitutional law as it applies to the first amendment, as seen in major Supreme Court decisions. Topics covered will include:  the definition of speech, including an examination of the difference between fundamentally protected speech and less protected speech, as well types of speech (i.e. oral, written, and speech as conduct); the role of government in regulating speech; and, the places available for speech, with an emphasis on schools and free speech. The first 90 minutes of the workshop will be devoted to this strong content. The remaining time in this first workshop will be devoted to application (How to use the content in your classroom).

Session Two: Fourth and 14th Amendments, participants will spend the first 90 minutes with a constitutional scholar looking at the fourth and 14th amendments, thereby, completing the analysis of the constitution. Once again, the remaining time will be used to apply the strong content in the classroom.

Workshop Description – During the two half-day workshops participants will explore the time period that begins with the framing of the Constitution and ends with the removal; of federal troops from the South, the so-called Compromise of 1876 that brings the era Reconstruction to a close. The period encompasses two distinct efforts at creating democracy in America. The issues that surfaced in both continue to echo through the following century and a half, the meaning of separation and division of powers, balancing liberty and equality, security and freedom, community and individualism, and who is an American.

Session One: The Written and Unwritten Constitution would examine the founding period, looking at the period from the ratification of the Articles of Confederation until the election of Andrew Jackson. The nature of the separation and division of powers, topics that continue to bedevil American public life today as they did not only during the debates on the ratification of the new constitution, but also in the period leading up to and following America’s Civil War, will be examined in terms of the Constitution’s language and the arguments made in The Federalist Papers and in the often too neglected writings of the Anti-Federalists.

Under the rubric of an Unwritten Constitution, the session will examine how the three branches of government developed in practice, topics such as the two-term tradition, the relationship between President and Congress, and the role of the Court, the creation of the institution of judicial review and its role in shaping our understanding of division of powers. Finally, this section will examine the beginnings of the two-party system and the issues that this system pushed to the fore and those that it suppressed.

Session Two: The Jacksonian Revolution will study the impact of the election of 1828 had on the party system and the issues that were raised in the debates on the Constitution, but that still remained to haunt American public life. The expansion of the franchise, the westward migration and the waves of immigrants from Ireland and the various German states led to a very different type of democracy than had existed previously. Just as Washington and John Adams put their Federalist stamp on government institutions, particularly the courts, so did “Old Hickory.” His Chief Justice, Roger Brooke Taney, would leave a mark on that institution almost as great as John Marshall. This period would begin changes in the role of the presidency and renewed struggles over division of powers as the 1787 compromise on slavery began to unravel.

The session will continue with The Second American Revolution, which will look at the impact of the Lincoln presidency, the Civil War and the Freedom Amendments on America’s political institution and traditions. In so many ways, Lincoln is the first modern president, albeit, none of his immediate successors would rise to his level of power. The Civil War caused the nation to face the problem of balancing real threats to security with liberty, the war powers of the chief executive, and the respective powers of the federal and state governments. It also led to a further spurt in the growing industrialization of a once rural nation. The Thirteenth, Fourteenth, and Fifteenth Amendments totally changed the relationship between the two levels of government, shifting the balance of power firmly and finally to the government in Washington. It would also finally provide the Court with a clear constitutional basis for playing a major role in our public life as an arbiter between the powers of government and the rights of individuals. The era of Reconstruction provides a lens again to look at the relations among the three coordinate but not co-equal branches of government in efforts to root out the various legacies of slavery, “The American dilemma.”

Our Next Summer Institute: K-12 Teachers

Learn more about the work we are doing with educators. View or download the following Summer Institute Reports and hear what participants have said about their experiences.

The Center is available to consult with school districts, schools, and educators on an as-needed basis to devise successful civics content and pedagogy for their teaching needs. Email us at info@rendellcenter.org to discuss your civics education needs, or call 215-746-6336.